The Powerful Female Leads on Game of Thrones

The women in Game of Thrones (GOT) are strong female characters.

About the Game of Thrones

Nine families fight for control of the mythical land of Westeros.

On the quest to sit on the Iron Throne.

The story started when Robert Baratheon, King of Westeros, asks his friend Ned Stark, to serve as Hand of the King.

As the previous Hand was assassinated, Ned accepts it so that he can investigate further.

Meanwhile, the Lannisters, family of the Queen, are also hatching a plot to take the Iron Throne.

Jaime pushes Bran off the castle, which made him paralyzed.  However, it made him acquire powers; later he becomes the three-eyed raven.

The last members of the previous ruling family, the Targaryens, are also scheming to regain power over Westeros.

The Viserys and Daenerys are descendants of Dragons.

A very ancient evil awakens in the farthest north.

The white walkers are led by the Night King, ruling a powerful army of Snow Zombies.

And that is what they have to defeat in the final season. 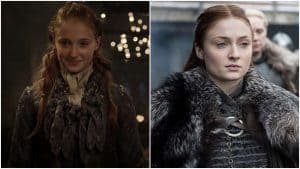 Sansa has been through hell and came out the other side. Her transition from a simple rich girl who’s about to marry the future king, Joffrey, to a strong independent woman to rule the north in season 8 was unexpected.

As Jon Snow, the proclaimed King of the North was looking for allies, she was keeping the North and other houses together.

She was the reason why Jon Snow and his men won the Battle of the Bastards.  The biggest battle in TV history, this battle was a savagely strong war chapter where House Stark overcame odds to reclaim their home.

Arya was once just a little girl who was safely taken away from her family after Ned Stark’s death as a way of safekeeping her from the wrath of the Lannisters. All those years they were apart, she was so focused on avenging her family, including Robb Stark and her mother Catelyn Stark.

She fought hard through her circumstances and survived.

She successfully kills the people responsible for her mother and brother’s death. However, she’s still on the quest of finishing everyone on her kill list, including the Lannisters.

Daenerys is the younger sister of Rhaegar Targaryen and Viserys Targaryen, a paternal Aunt of Jon Snow, which was later on revealed in Season 8.

She married Khal Drogo to gain the Dothraki as allies in taking back the throne. She received three dragon eggs as a wedding gift.  The hatched dragons became her adopted children who follow her command and later, became her weapons.

She then builds her own base of power:  she liberated the slaves of Slaver’s Bay, gains the Unsullied, and unites the Dothraki, thus giving her the strongest army.

Hence she is named:  Daenerys Stromborn of House Targaryen, The First of Her Name, Queen of the Andals and The First Men, Protector of the Seven Kingdoms, The Mother of Dragons, The Unburnt, The Breaker of Chains the Khaleesi of the Great Grass Sea.

She had an incestuous relationship with her brother Jaime Lannister, who is the father of her three children. Joffrey, Myrcella, and Tommen.

Margaery Tyrell’s family, the wife of King Joffrey, poisoned him on their wedding day. Because of his rude and sadistic behavior, the Martells poisoned Myrcella, killing her instantly, while Tommen jumped off the castle.

This resulted in making her Cersei Queen of Westeros.

When Sansa was married to Ramsey Bolton, he abused and tortured her.  This was something that Sansa never expected to happen.

She survived and became stronger than ever.  She did not dwell on her past trauma but instead, she helped her brother Jon Snow to reclaim their home of Winterfell from Ramsey Bolton. She continued to care for the northerners and lead them to safety.

Daenerys had a similar fate with Sansa. But she used her situation as a stepping stone in winning the hearts of people and defending them from captors. Arya traveled across the seas and trained as a faceless man in Braavos to use her skills to avenge her family.

The show has a balance of strong men and women.

It also shows us that women can be unstoppable and as powerful as you can imagine.

Which GOT female character are you? Are you a Dany or a Cersei?