Exxpedtion is an all-women voyage group who travels around the globe on remote parts with a goal to raise awareness about plastic pollution.

Emily Penn launched eXXpedition n 2014 seeing the volume of plastic in the oceans as she sails around the world.  Their aim is to recognize the extent of plastic pollution and understand the types of plastic that are present in our oceans.

They collect samples of water, sand, and air and the eXXpedition’s marine scientist analyze how it got contaminated.  Water samples are collected from the water surface to the seabed and the air.

They also conduct research on how plastic contamination is harmful to physical health, especially on women, with regards to fertility and hormone function, as well as its harmful effects on marine life.

Their focus is to further understand the effects of toxins and microplastics on human and environmental health.

eXXpedition’s first voyage covered the Pacific Ocean and they are now recruiting for female voyagers for Round the World Voyage 2019-2021. They voyaged through the Great Pacific Garbage Patch, or what we also call the North Pacific Gyre, which is catch basin of all our plastics due to the ocean currents.

What did they find in the ocean?

According to Emily Penn, it was surprising to see what they have seen because they feel like on land they’re starting to do things.  For example, great efforts are being made to increase awareness about people using reusable plastic bags, reusable straws, and water bottles.
It seems like people are doing their part practicing a zero-waste lifestyle.  However, when we see what’s happening out there in the oceans,  it looks like an increase in pollution and/or many years of plastic waste accumulation.

It is called plastic soup:  trillions of microplastics float in a million square miles of ocean. 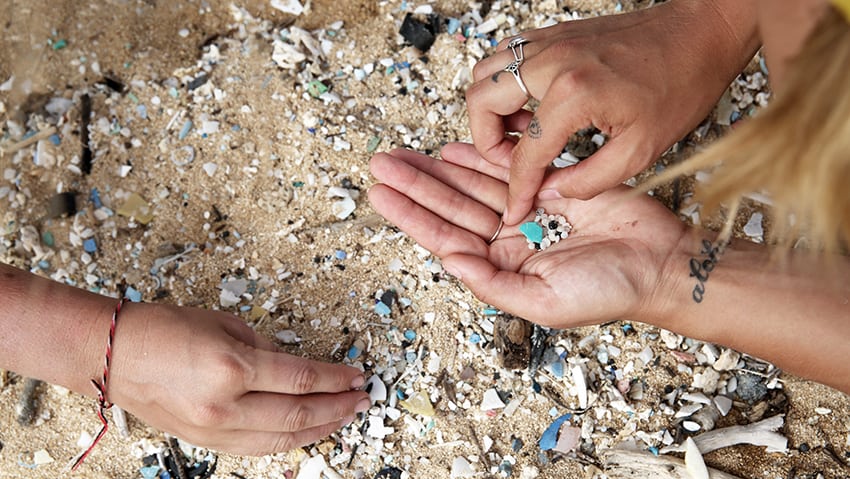 When the eXXpedition voyaged on the Southern edge of the Gyre they see plastic on the edge of the boat every 10 seconds, from small ones like lighters, to bigger ones like plastic bottles.

And the plastic garbage goes on and on…. even when they wake up the next day.  This is beyond overwhelming.

When they put the trawl through the water to collect samples, they pull up more than 500 different fragments of plastic, almost invisible to the naked eye.

They also find industrial waste and bisphenol A that trickles into food and drinks.  These chemicals have been linked to breast and prostate cancer.

Why is eXXpedition an all-women crew?

They’ve discovered the potential risks of these plastic chemicals to a woman’s body that are in our oceans.  There are pesticides, flames retardants and more.

According to their findings, our bodies are polluted by plastics as they are transferred through the food chain.  And most of the chemicals that they find are endocrine disruptors that mimic hormones.

In addition to being harmful to individual women, plastic pollution could be passed on to children during pregnancy, affecting the baby’s development.

It is clear that plastic pollution is a health problem as much as it is environmental issue. eXXpediton wanted to tackle this woman’s health issue with an all women-crew.

There is still a long way to go

Despite the increase in awareness of the plastic crisis, eXXpedition members are still seeing a huge amount of plastic in the oceans, even on their 10th voyage.

And the samples they have pulled, the toxins were even higher than in any of their past voyages.
This discovery reveals a dark truth about what is really happening:  plastic pollution is not just what we see with the naked eye, like the plastics floating around.

The toxins these plastics produce and the industrial waste that is on our oceans are DIRECTLY affecting us, and we don’t know this. It is a huge wake-up call for all of us.

Our world is covered with oceans.  If there are more people like Penn and the volunteers of eXXpedition, this crisis can be solved.  It may be years from now but it will be.
Perhaps doing our small part would help the environment as a whole. Hopefully, years from now, there will be no more plastic in our oceans and we will no longer be using non-biodegradable materials.
Recommended from our shop