How Alexandria Ocasio-Cortez Made History 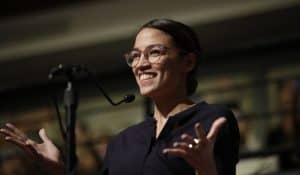 As a teenager, Alexandria Ocasio-Cortez always spoke her mind about political topics at school and at home.

According to her mother, Blanca Ocasio-Cortez, “I saw the political tendencies since she was very, very young.”

Ms. Ocasio-late Cortez’s late father, Sergio Ocasio, is an architect born and raised in the Bronx. Her mother Blanca Ocasio-Cortez was born in Puerto Rico. They lived in Parkchester in a mid-rise building apartment until she was 5.

In the search for better schools, they moved to Yorktown Heights in Westchester County.

When she was a 17-year-old senior student,  she presented herself to the judges as if she were an experienced professional businesswoman when she presented her project about the anti-aging effect of antioxidants in roundworms at the Intel International Science and Engineering Fair in 2007.

According to her science teacher Mr. Blueglass, Alexandria “was interested in research to help people in all areas, including developing nations, not just for the people with money.”

Her journey in politics

Alexandria Ocasio-Cortez, known as AOC, started her involvement with politics during college when she worked for Senator Edward M. Kennedy, a Massachusetts Democrat. She later turned her attention to grassroots work, which defined her candidacy.

At this time, AOC was working at a taco restaurant in Union Square.  She would head off to political meetings after her shifts.

Upon her return to the Bronx shortly after graduation, she started advocacy to improve childhood literacy and education. Part of her advocacy was starting a children’s book publishing company. Later, she became an organizer for Bernie Sander’s political campaign.

Her decision to run for office was her experience protesting at the Standing Rock Sioux Tribe reservation in 2016 against the Dakota Access Pipeline.  Brand New Congress, a newly formed progressive organization, asked her to run.

“I spent the entire first part of this campaign just going to people’s living rooms and having them invite their neighbors, and just doing little coffee parties for like six or seven months,” she said. “And that’s how we really started this campaign.”

For six years she has also taught summer courses in community leadership to students for the National Hispanic Institute.

They urged voters to push a powerful message which includes a call for free tuition on public colleges, Medicare for everyone, and the abolition of the Immigration and Customs Enforcement agency.

There were about thirty willing volunteers who used a private WhatsApp group to coordinate the strategies.

In sum, AOC has been a waitress, a children’s book publisher, a community and social activist, an advocate for education focusing on grass-roots issues, a member of the Democratic Socialists of America, and former Bernie Sanders campaign organizer.

AOC is a political rock star and the youngest congresswoman in history at only 28 years old.

She beat one of the senior leaders in Congress, Joseph Crowley, in a near-landslide.  He was a 10-term incumbent from Queens who had not faced a strong challenger in fourteen years.

In AOC’s younger years, do you think she has thought about how to become a politician?

Who has ever thought that this young woman from the Bronx would win so decisively against one of the most senior leaders of the House, a woman half his age with a heart for people?

Even in her younger years, AOC always thought about people- how to solve their problems and how to be of help to them.

Her victory is one of the finest examples of how seemingly impossible things can happen. In a world filled with men-dominated governments, there is room for us women.

There is a certain power in us that can be unleashed once we are put into the spotlight.

Every man must decide whether he will walk in the light of creative altruism or in the darkness of destructive selfishness. -Martin Luther King