The Power Of Sister Circles and Safe Spaces

A few years ago, Jessica Ann Mitchell Aiwuyor contributed her thoughts about the power of sister circles and safe spaces to Sisterhood Agenda’s Girl Guide:  How to Be a Sister.  Featured on our older website, her contribution was as invaluable then as it is now.

As then, now is the right time to share her insights about sisterhood connection.

Here is the complete essay in its entirety:

In graduate school, I was invited to join a sister circle. At the time, I had no idea what that was. What resulted was a life long bond with a group of Black women from across the diaspora (Guyana, Dominican Republic, & across the US). We shared our stories and spent hours revealing our inner insecurities. We trusted each other with our deepest regrets, struggles, and fears. It was through our sister circle that I learned about sisterhood. There were many tears, hugs, and affirmations.

To share your story…To be real with a circle of people you can trust is one of the best feelings in the world. And I deeply believe that it is through these types of bonds that Black women have been able to survive so many atrocities and still come out with our sanity. Safe spaces in the presence of our sisters is the place to heal because we know so much of the world seems against us, rushes to judge us, and disregards our truth. It was in these moments that I felt a wholeness that can only be achieved in knowing that these sisters had my back. We could go to each other for anything.

Outside of the sister circle in grad school, I have another circle of friends including sisters I’ve known since I was 12 years old and others I met during my freshman year of college. I can’t tell you how many times I’ve made or received early morning or late-night phone calls during which we’ve vented, came to each other’s rescue, and just served as a much-needed listener. Sometimes, just having somebody listen makes all the difference.

Black women’s sisterhood is so strong that the army has actually started studying it. As the army deals with high suicide rates among soldiers, one thing has remained true…Black women still have the lowest rates of suicide in the military even though we all know they face higher rates of discrimination. Yet, we live on. The army wonders what Black women have that other groups don’t.

While the government does not break down military suicides according to race, among the general population African-American women have the lowest suicide rate of any group. Surprisingly, white men die most often by their own hand. “By comparison, the rate for black women was less than three suicides per 100,000.” “The sense of community among themselves, and the … built-in support that they get from each other is something we’re paying a lot of attention to, and trying to find ways to emulate,” Kemp told Government Executive. “I think often that veterans and men don’t have that same sort of personal support, and we have to build that for them.” – The Grio

… Prime Time Sister Circles, a 12-week program focused on helping African American women in midlife improve their nutrition and fitness, and deal with stress. And just as important, participants say, the Sister Circles provides them with emotional and spiritual support akin to a long, tight hug. The circles are kept relatively small: no more than 25 women. Participants include those who make six-figure incomes and others with more modest means. They meet for two hours, once a week over three months and often learn that more things connect than separate them. – Washington Post 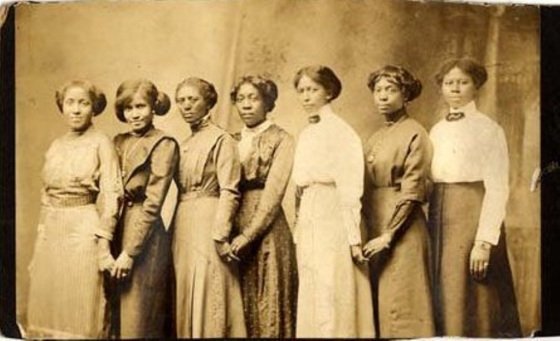 Just having the experience of being a part of a sister circle, makes me think about the survival of the generations of women that came before us. The bond between sister friends is a deep aspect of our history. And that is why I believe Black women have become so resilient. Not out of anger but out of emotional bonds that hold us up.

So today, I just want to say thank you to all of my sister friends and our sister circle.