I recently watched the movie, Fast Color, on Amazon.  I was moved by this movie in a way that few movies have affected me, so I felt compelled to write about it. 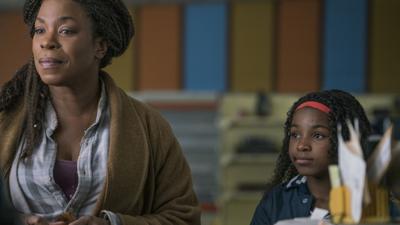 Set in the bleak apocalyptic future where the last rain was eight years ago, Fast Color, directed by Julia Hart, is the story of Ruth (Gugu Mbatha-Raw), her mother Bo (Lorraine Toussaint), and Ruth’s daughter Lila (Saniyya Sidney), a generation of women gifted with the extraordinary power to telekinetically disintegrate objects and reassemble them amid vibrant flashes of color that they call “the colors.”

Ruth does not see the colors, at first.  Instead, Ruth has uncontrollable seizures that result in violent earthquakes wherever she is.  This destruction leads her to flee the home that she eventually returns to.  Her mother hides her power while her young daughter fearlessly uses them to help herself and defend those she loves.

With her family’s support and sacrifice, and only after overcoming her own fear and trauma, Ruth, our reluctant superhero, finally takes control of her body and her powers.  She finally sees the colors,  yet her powers are way beyond those of her mother and daughter.

(Spoiler alert) Bo sacrifices herself to the scientist who was after Ruth to give him someone to run his tests on as a bargain to leave her daughter and granddaughter alone.  After controlling herself and seeing the colors, Ruth has the unimaginable ability to control the earth itself and “take apart the sky.”

In her first act of restoring the mother of us all, Mother Nature, Ruth brings the much-needed rain. It is a poignant moment. She did it by herself.  Rain will save humanity and help heal the earth.

Fast Color is beautifully written, prophetic, and timely.  In addition to making me smile with pop references like Lauryn Hill, the Sex Pistols, and Nina Simone, I gained wisdom.

Specifically, what I learned: